·
Eh you tell me can die or not, this stupid handsome Ang Choon Seong of the fehmes whatablog.blogspot.com. He one day posted this la, I tell you I can suffer and vomit and die okay. Why? WHY?! Why you see this and tell me why!

*an excerpt from ang’s blog*
Side dish for today: NB: I terdiscovered that this steven lim shared the same lifelong philosophy with me as well. But he went a few steps forward. Check out his blog. And instantaneous puking warned. Hahahah..

Cause hor, he himself think he’s the hensemest person in the world!

*an excerpt from ang’s blog*
The second poll (POLL B) is: Do you think the above hansome gentleman is handsome?

Okayla that picture doesn’t do justice. He actually looks like this: Okay la so saying he’s handsome maybe true, but wahrao he ownself say NO SHAME SHAME ONE! Eve can testify for me. She calls him the “buaya“. Later also I found out Shizune also feel the same way. See, I’m not the only one okay.

Or sometimes the funniest person in the world also got.

*an excerpt from ang’s blog*
Why? Why?

Why I am not funny? Why? Why? I am confused. I thought i am funny.

I tried so hard to be funny.

But recently, i discovered that I am not funny.

Actually hor, he’s really funny one. He can even make the whole soilek action seem like a joke (ok la not that funny la but still)

Most of the time he either makes sense or nonsense. Sometimes a little of both. Sometimes he does funny adverts. Sometimes he attempts to do a food review, but sorry la bang, fail man!

Aiya but in the end hor, I will never forget him as the person who invited me to play in a football tournament in his team kat Sheffield Games 2007, without even meeting me before. WHAT TRUST!! 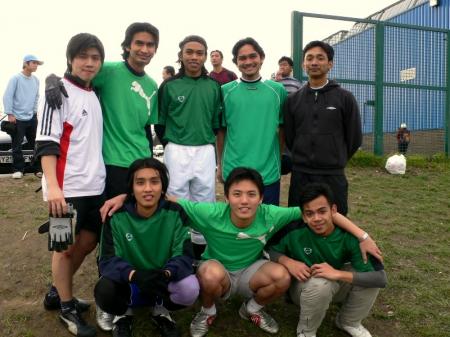